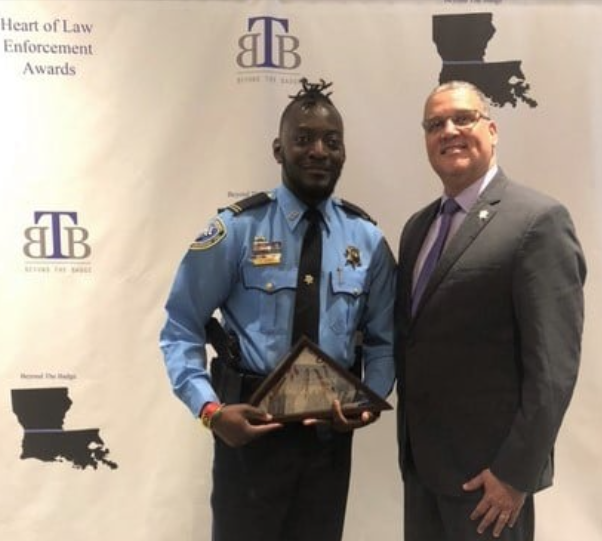 Det. Keniel Henry, an officer with the St. John Parish Sheriff’s Office Special Operations Division, was honored with the top award, Service Before Self, during a recognition ceremony March 8, 2022 presented by the citizen-led volunteer nonprofit organization, Beyond the Badge. Beyond the Badge works to inform the public about law enforcement officers performing extraordinary acts of kindness in their Louisiana communities.

Det. Henry was among 15 officers statewide chosen to receive the Heart of Law Enforcement Award during the annual Beyond the Badge recognition luncheon in Baton Rouge. Det. Henry also was selected to receive the Service Before Self award, presented to an honoree whose act of kindness stands out among all of the nominees.

Det. Henry was recognized for his work with the homeless in New Orleans. For several years now, as his birthday approaches each year, Detective Henry and his family start a grocery list to prepare meals for people in need. On Detective Henry’s birthday, July 9, they cook and deliver the food to homeless people staying under the Claiborne/I-10 overpass in New Orleans. He pays for everything and conducts the entire project in his free time. In 2020, Det. Henry also began a drive to collect blankets, gloves, and warm clothes for the homeless. His family as well as community members buy and collect new and used blankets and clothes, and Det. Henry delivers the items each January.

More than 200 guests attended the Beyond the Badge Heart of Law Enforcement ceremony. Sheriff Mike Tregre was among the elected officials and law enforcement officers in attendance. Honorary Event Chairman was Lt. Gov. Billy Nungesser. Actor John Schneider of “The Dukes of Hazzard” and “The Haves and Have Nots” was the speaker.

“It’s inspiring to this department to see Detective Henry perform this act of kindness and give of his time to help others,” Sheriff Tregre said. “He truly enjoys giving back to the community. At this time, when there’s so much negativity about law enforcement, I appreciate the Beyond the Badge organization for its hard work to recognize officers who go beyond the call of duty.”