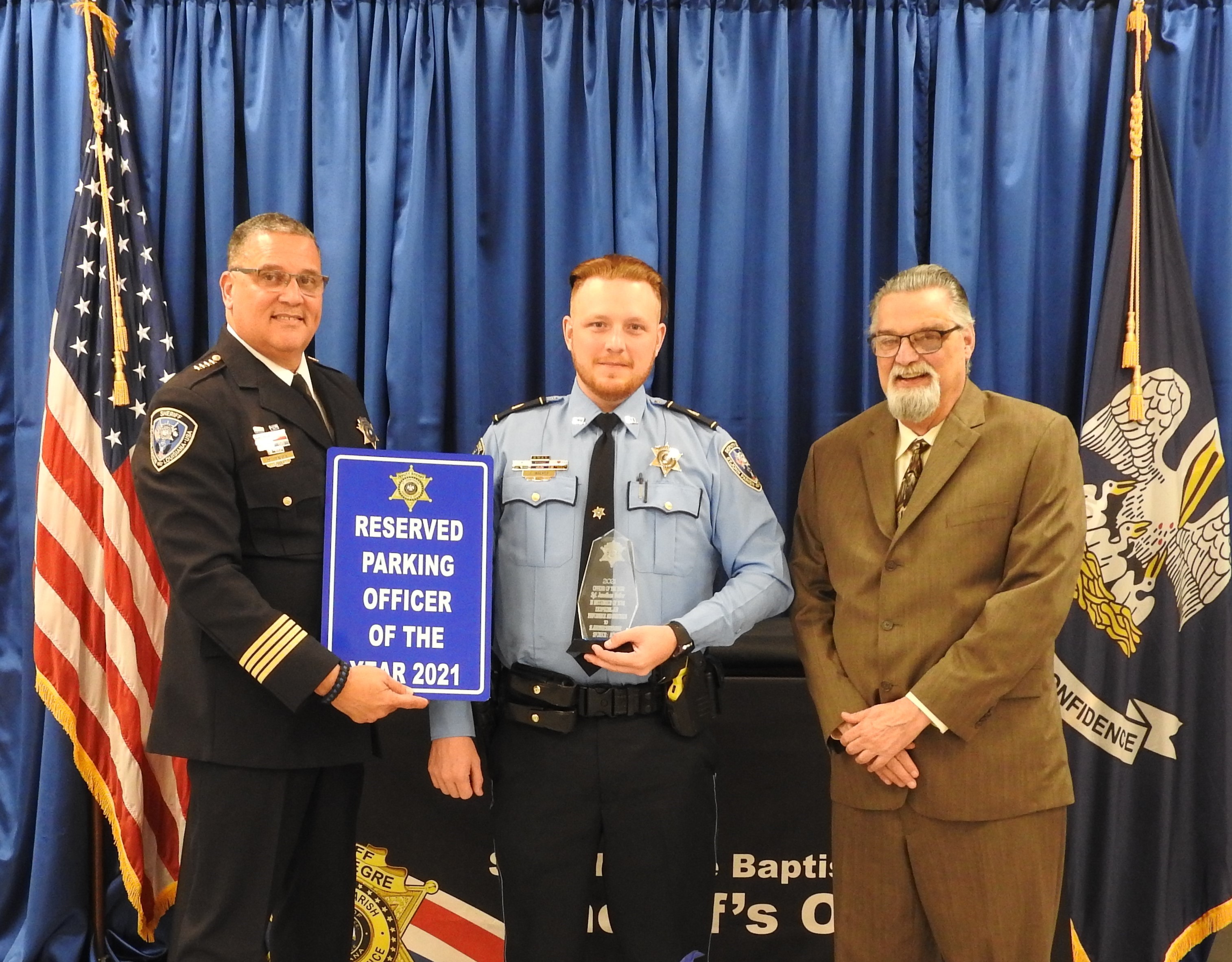 Det. Sgt. Jonathan Walker was named 2021 Officer of the Year by the St. John Sheriff’s Office during the eighth Officer of the Year Awards Ceremony January 13, 2022 at the Lloyd B. Johnson Law Enforcement Training Center in LaPlace. Sgt. Walker, a member of SWAT, was honored for his valiant effort during an active shooter incident July 31, 2021 on Interstate 10 in St. John the Baptist.

Sgt. Walker was off duty, traveling with his family on I-10 at the time of the incident. He left his vehicle on foot, without a radio or body armor, to assist during the incident in which two people were injured by gunfire. Sgt. Walker located the shooter and ended the threat as he handcuffed the shooter during a brief struggle.

Several officers and their family members and guests attended the program that honors the Officer of the Year as well as pays tribute to outstanding officers. These officers are recognized for their dedication to public service, outstanding commitment to the community, excellent police work, and the commendable manner in which they perform their jobs. Sheriff Tregre works with several local businesses that provide sponsorships and contributions to award these outstanding officers.

Two officers were awarded the Medal of Valor, which is given to officers for performing a brave attempt to rescue someone from suffering severe bodily harm or the loss of life, or committing an act requiring great courage in the face of life threatening danger.

They are Det. Sgt. Jonathan Walker and Deputy Elton Breaux. These officers were recognized for their valiant efforts during the active shooting incident on July 31, 2021.

Both officers were off duty, traveling with their families on I-10 where the incident occurred. Both decided to leave their vehicle on foot, without a radio or body armor, to assist. Deputy Breaux found one victim and provided cover and safety for him and other responders; while Sgt. Walker pressed the fight, located the shooter, and arrested him. Two victims were injured, and treated at a local hospital and released.

Sgt. John Norsworthy was honored with the Sheriff’s Star for exceptional service to the community and the SJSO.

The SJSO also acknowledged businesses for generous support of law enforcement. Businesses recognized for sponsoring the Officer of the Quarter were Henri Dufresne of State Title LLC, Law Offices of Barry J. Landry, Greg and Beth Fincher of Summit Homes, and Billy and Dawn Butler of Moore New Homes. Tatje Insurance and Financial Products and the St. John Business Association were recognized for supporting the recognition program each year.

Nathan Stein of Assured Compliance Inc. was honored as the sponsor of the Officer of the Year award.

Sheriff Tregre said he is proud of the department and its accomplishments in 2021, and his officers will continue to work hard to protect and serve the community.