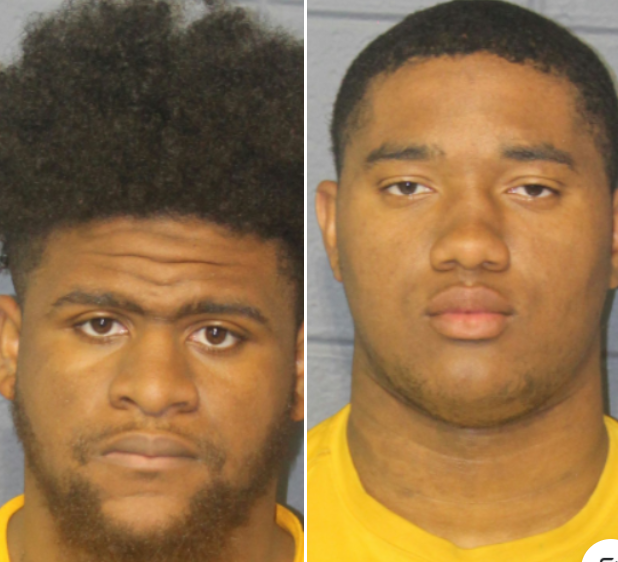 Patrol officers arrested four male subjects, including two juveniles, all from New Orleans, and recovered five guns during a traffic stop Tuesday, June 8, 2021, in LaPlace.
While on patrol in LaPlace, about 1:30 a.m., officers observed that a vehicle traveling on West Airline Highway had a broken tail light and proceeded to conduct a traffic stop.
The driver stopped the vehicle, and four males exited the vehicle, walking quickly in different directions as they displayed their hands. Officers immediately ordered the males to place their hands on the vehicle and to not move. The males complied with the orders.
Officers identified the driver as Terrance Peters, 19; Larry Howard, 18, and a 17-year-old juvenile and a 16-year-old juvenile.
Officers also detected a strong odor of marijuana emitting from the vehicle, and the 16 year-old produced a bag of marijuana and told officers he had smoked marijuana in the vehicle.
Based upon the odor of marijuana from the vehicle as well as the juvenile being in possession of marijuana, officers determined probable cause to search the vehicle. Searching the vehicle, officers located an AR-style rifle with a loaded magazine inside a school bag on the floorboard. Officers also located four other guns in the vehicle.
Officers also located a bag with cocaine in the 17-year-old’s sock; and a bag of marijuana in the 16-year-old’s sock. The 16-year-old also was wanted by NOPD for possessing a handgun 2nd offense.
Peters was booked with encouraging child delinquency/dependency/neglect (misd) and possession unidentifiable firearm (felony). He was released June 8, 2021.
Howard was booked with encouraging child delinquency/dependency/neglect (misd) and possession unidentifiable firearm (felony). He was released June 8, 2021.
The 17-year-old was booked with contributing to the delinquency of a juvenile (misd); possession unidentifiable firearm (felony), possession of cocaine less than 28 grams (felony), illegal carrying of weapon with a controlled dangerous substance, and illegal possession of a handgun by a juvenile (felony).He is being held in custody in lieu of a $41,000 bond.
The 16-year-old was booked with three counts of illegal possession of a handgun by a juvenile (felony), possession of marijuana 1st offense (C2A) (misd), possession unidentifiable firearm (felony). He also was wanted on a fugitive warrant for the New Orleans Police Department. He was transferred to NOPD.
“A traffic stop for a minor equipment violation led to these arrests including the arrest of juveniles on firearms and drug charges,” Sheriff Tregre said. “Good judgment, professionalism, good decision-making skills, and teamwork contributed to the successful outcome of this incident.”