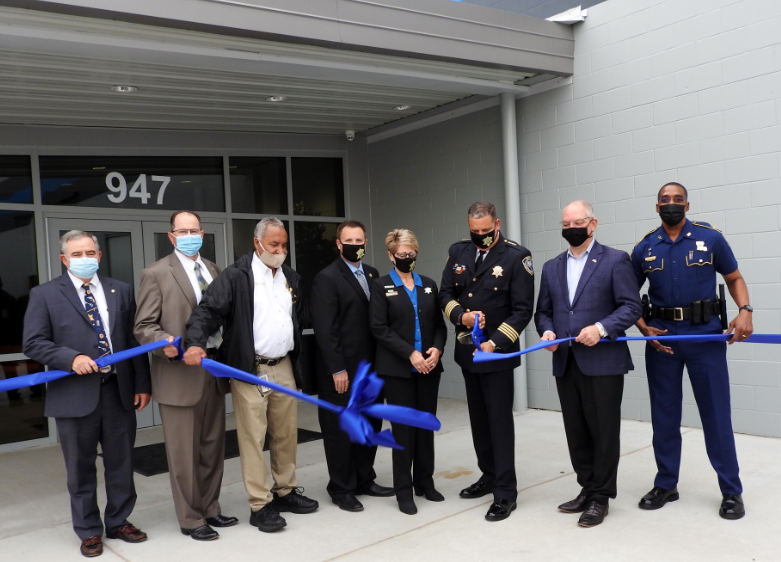 Sheriff Mike Tregre was joined by Governor John Bel Edwards and several elected officials statewide this morning to celebrate the grand opening of the St. John Parish Sheriff’s Office’s new Lloyd B. Johnson Law Enforcement Training Center at 947 Cambridge Drive in LaPlace.
“This is a product of visionary leadership,” Gov. Edwards said. “… This facility is state of the art … it’s something to be very proud of. I believe Sheriff Johnson would be proud of it, too. I’m so happy to see his name on this facility.”
The new training facility, which is named in honor of Johnson who served as St. John Parish Sheriff for 20 years, will enhance safety, address professional training needs, offer community education and benefit the entire community and local economy, Sheriff Tregre told the audience who attended the grand opening and ribbon cutting ceremony. Building a quality training facility that serves law enforcement and the community is critical to public safety, Sheriff Tregre said. Officers who are well trained are better prepared to act decisively and correctly, which results in greater productivity and effectiveness, he said.
“There are so many Monday morning quarterbacks who will scrutinize decisions of law enforcement officers or what training they had or did not have that may have contributed to good or bad decisions made in split seconds or were made hours or days at a time … so let’s look at their training record,” Sheriff Tregre said. “We, as sheriffs and chiefs, have to train our officers better than ever before. Police officers have to follow the rules, and when we don’t follow the rules, the criminal will walk.”
Sheriff Tregre also spoke about the projected community impact of the new facility includes benefits such as reduction of blight, increased interaction between citizens and law enforcement, boosting police presence, and the ability to offer women’s self defense classes, crime prevention programs, hunter education, public range dates, and concealed carry classes. It also can benefit the local economy as instructors and officers nationwide have the opportunity to travel to the River Parishes for training.
Among the highlights is a simulation room that will reflect real life situations including traffic stops, domestic violence calls and dealing with armed individuals. Other features include indoor shooting ranges, a classroom, a fitness area, a mock jail cell and a kitchen that will become a site for inmates to develop culinary skills with help from a certified instructor.
On the outside of the building, a memorial for fallen law enforcement officers will be erected. A paved area on the north side of the building will be used for driver training and driver improvement courses for law enforcement officers.
In 2016, Sheriff Tregre and his training staff began looking at locations throughout St. John Parish for a training center. They also began traveling to visit the best law enforcement training facilities in the United States. In 2017, the SJSO purchased the old bowling alley and grounds, demolished the building and began to construct this new state of the art training center, the Lloyd B. Johnson Law Enforcement Training Center.
In closing the grand opening ceremony, Sheriff Tregre thanked Gov. Edwards for taking the time to speak at the ceremony, Glynn Boyd who served as master of ceremony, and the sheriffs who have allowed the SJSO to utilize their shooting ranges. The St. John Parish Sheriff’s Office Honor Guard conducted the presentation of colors. Emma Wale sang The National Anthem. Rev. Jeff Patterson led the opening prayer; and Deacon Richard Abbondante led the closing prayer. The Rev. David Ducote also led a blessing of the entire facility.
Chief Civil Deputy Jeff Clement said the training center project cost about $10 million and will be paid for by the department’s current revenue with no additional cost to taxpayers.