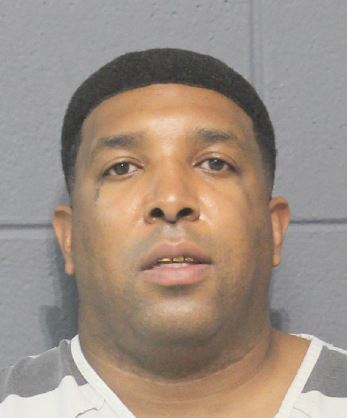 Jermaine Benjamin Thompson, 43, of Williston, Fla., was arrested Thursday, February 18, 2021 after he stole four Apple watches from a LaPlace business and attempted to board a plane for Florida.
On Wednesday, February 17, 2021, about 4:30 p.m., officers responded to Walmart Supercenter in LaPlace in reference to a theft. Upon arrival, officers learned a male subject, later identified as Thompson, entered the store, walked to the Electronic Department and told an employee that he wanted to purchase four Apple watches, valued at $400 each, among other purchases. The employee delivered the watches to a register at the front of the store where the employee left the watches and returned to the Electronics Department. Thompson then completed a small purchase, not including the watches, at the register. When the employee proceeded to ring up the Apple watches as another purchase, Thompson produced a piece of paper and told the employee that he completed the purchase of the watches in the Electronics Department. Thompson then quickly took possession of the watches, exited the store, and fled the parking lot in a vehicle.
Based on further investigation and review of video surveillance, detectives developed Thompson as the suspect and obtained a judicial warrant for his arrest. Detectives made contact with Thompson Thursday, February 18, 2021 at the Louis Armstrong New Orleans International Airport where he had booked a flight to return to Florida. Detectives also found Thompson in possession of luggage filled with stolen Apple devices including iPads, watches and AirPods.
Thompson was charged with theft – $1000 – $5,000 (felony). He is being held in custody in lieu of a $5,000 bond. Thompson also was wanted by the New Orleans Police Department on a fugitive warrant for simple battery.