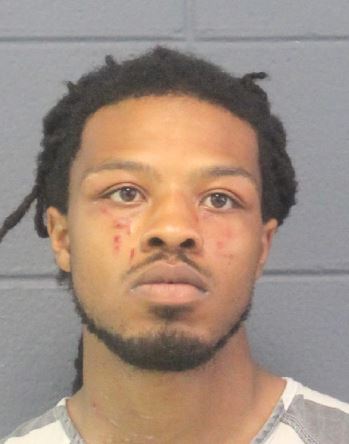 Sheriff Mike Tregre announced a situation involving a man who stated he was armed with two guns and barricaded himself inside his Oak Point Drive home ended peacefully in the afternoon of July 27, 2020 with no injuries.
Keenon Alexander, 21, of LaPlace surrendered to officers and was taken into custody. Alexander was transported to a local hospital for mental/medical evaluation. Subsequently, he was cleared and released to police. Alexander was charged with domestic abuse battery (misd), and two counts of simple criminal damage to property – under $1000 (misd). Alexander also was wanted on a fugitive warrant for New Orleans Police Department.
Sheriff Tregre praised the performance of officers who handled this incident. “All the officers worked together and get tremendous credit for de-escalating this situation,” he said.
Sheriff Tregre also thanked the Jefferson Parish Sheriff’s Office for the use of its drone and robotic cameras. Residents of Oak Point also contributed to this successful outcome, Sheriff Tregre said.
“I’m grateful to the area residents who cooperated with officers with instructions to stay inside of their homes or were told to evacuate their home during this standoff,” he said.
On Monday, July 27, 2020, about 9 a.m., officers responded to a residence in the 500 block of Oak Point Drive in reference to a domestic disturbance. Upon arrival, officers learned Alexander and a relative had an argument that escalated into a physical altercation. The family member was able to flee the residence as Alexander claimed he had two firearms and barricaded himself inside the home.
Crisis negotiators arrived on scene, and patiently talked to Alexander for the next five hours to de-escalate the situation for a peaceful surrender. During the five-hour standoff, officers used drones and robots provided by the Jefferson Parish Sheriff’s Office to assist in clearing the residence. Officers also used distraction devices, which some neighbors may have heard. No shots were fired. Alexander came out of the house willingly and surrendered about 2 p.m.
During the standoff, some of the surrounding homes were evacuated for safety. No one in this area was injured. During a search of the residence, a firearm was recovered.
Alexander is being held in custody in lieu of a $5,000 bond.