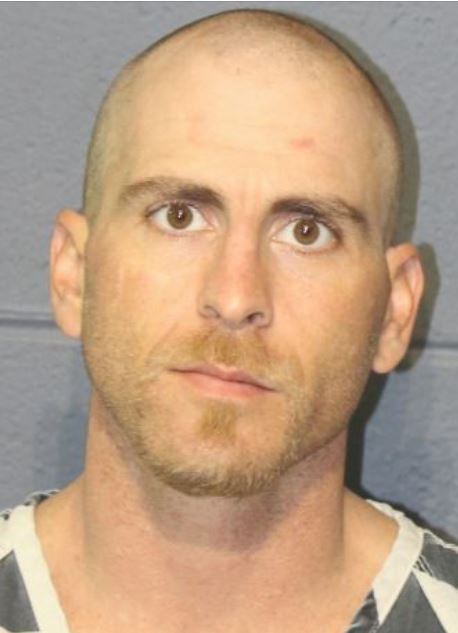 The U.S. Marshals Service (USMS) New Orleans Task Force with support from St. John the Baptist Parish Sheriff’s Office, LA State Police and the New Orleans Police Department located and arrested St. John the Baptist Parish Sheriff’s Office Aggravated Kidnapping fugitive sex offender Aaron Zander DUN (AKA: Aaron Stanley or James Perry–33 years old) hiding under a residence in the 2400 block of Republic St. New Orleans, LA. The arrest was made based on critical support from a Crimestoppers GNO tip. Law enforcement officers spotted DUN walking on North Broad and then entering and exiting a local pharmacy in the area. As officers attempted to arrest DUN on St. Bernard Ave. he pushed off of an officer and fled into a local neighborhood. DUN refused to come out of hiding underneath a residence and after multiple attempts to call him out a LA State Police K-9 Unit had to be deployed and after DUN attempting to retreat further under the occupied residence he finally surrendered.

DUN was already wanted by the Jefferson County, Alabama Sheriff’s Office since February of 2020 for Failure to Appear in Court on a pending Failure to Register as a Sex Offender charge as well as for not updating his sex offender registration. He is alleged to have been involved in a vehicle pursuit on May 5th with LA State Police in a stolen red Kia Soul out of Alabama while he was driving through St. John the Baptist Parish. Investigation by several law enforcement agencies indicates that DUN and two associates in the vehicle with him were attempting to buy illegal narcotics while driving around the New Orleans metro area. DUN evaded arrest after flipping the stolen car and later resurfaced in the 2000 block of Sugar Ridge Drive Laplace where he is then alleged to have committed a home invasion which resulted in DUN kidnapping a 73 year old female from her residence. The victim’s 93-year-old mother, and a 7-year-old child were inside the residence during the home invasion. DUN is alleged to have held the 73-year old victim at knife point forcing her into the passenger side of her 2002 red Toyota Camry. DUN fled the scene with the victim but later dropped her off in the parking lot of a local Laplace, LA hotel before fleeing onto I-10.

On Friday, May 08, 2020, the U.S. Marshals Task Force and LA State Police located DUN driving the stolen red Toyota Camry at Tulane Ave. and South Jefferson Davis Parkway and marked LA State Police Units attempted to stop the vehicle at which point DUN fled causing an accident at D Hemecourt St. and S. Carrolton Ave. New Orleans, LA. DUN then fled the scene on foot during a rainstorm. New Orleans EMT assistance had to be requested for the occupants of the vehicle that DUN hit during his effort to avoid stopping for law enforcement.

DUN will be booked into Orleans Parish Criminal Justice Center to face return to St. John the Baptist Parish to appear in court on the warrant charging him with Home Invasion, Armed Robbery, and Aggravated Kidnapping. LA State Police will be adding additional charges of Aggravated Flight from an Officer, Resisting an Officer, Hit and Run Driving, Aggravated Obstruction, Unauthorized Use of a Moveable and Operation of a Vehicle while Driver’s License Suspended.

DUN was previously convicted in 2017 in Alabama of Sexual Abuse in the First Degree and the victim of his conviction was a 9 year old female child known to DUN.

The U.S. Marshals Service with support from the Eastern District of Louisiana U.S. Attorney’s Office will also begin a federal Sex Offender Registration and Notification Act (SORNA) investigation into DUN for crossing state lines and not registering as a sex offender in Louisiana.

Eastern District of Louisiana U.S. Marshal Scott Illing stated, law enforcement officers from St. John the Baptist Parish, LA State Police, New Orleans Police Department and my U.S. Marshals New Orleans Task Force have been working around the clock since May 5th to locate and arrest this dangerous fugitive. The U.S. Marshals Service Office Northern District of Alabama (Birmingham, AL) also assisted on the case. This arrest is an example of how team work between law enforcement agencies can make communities safer. I would also like to thank Crimestoppers GNO as this arrest was made with a critical tip from the public that led to DUN being spotted walking around near North Broad St. and St. Bernard Ave. in New Orleans. The public can make a difference and only with public support can we make communities safer.

information about violent fugitives and sex offenders can be provided to the U.S. Marshals Service at (504)589-6872 or via email at usms.wanted@usdoj.gov Crimestoppers GNO may also be contacted with tips at (504)822-1111.