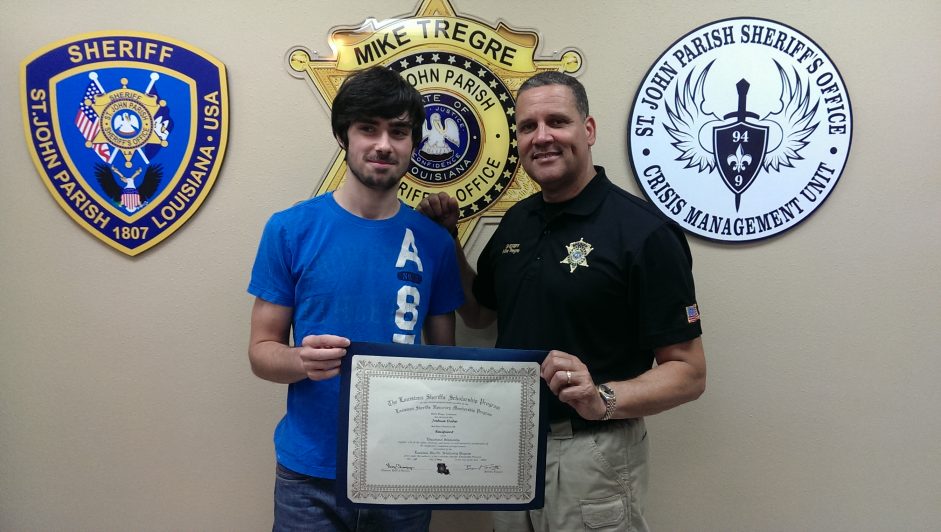 
Sheriff Mike Tregre announced that Joshua Duhe of St. John the Baptist Parish has been named the recipient of the 2014-2015 academic scholarship from the Louisiana Sheriffs’ Scholarship Program.   Joshua, a 2015 graduate of East St. John High School plans to attend South Central LA Technical College to pursue Technical Studies as his field of study. He is the son of Raymond and Cindy Duhe of LaPlace, LA.


Made possible by the Louisiana Sheriffs’ Honorary Membership Program (LSHMP), Louisiana Sheriffs provide scholarships to graduating high school students from each parish where the Sheriff is an affiliate of the Program.

Qualities such as academic achievement, leadership and character are considered in making selections of Sheriffs’ scholarship recipients. The only limitations are that applicants be permanent residents of Louisiana; scholarships be utilized in higher education within the State; and students be enrolled as full-time, undergraduate students. Scholarships will be awarded in sixty-three parishes throughout the State.

Concludes Sheriff Tregre, “Academic awards by the Louisiana Sheriffs’ Scholarship Program to Louisiana students best demonstrate what the LSHMP is all about. This is one of our proudest accomplishments. Simply, it is a means of investing in Louisiana’s future. And this would not be possible without the generosity of our St. John Parish Honorary Members.”

For further information regarding the Scholarship Program, click here or contact the St. John Parish Sheriff’s Office at (985) 653-9513