2013 Officer of the Year Awards Ceremony 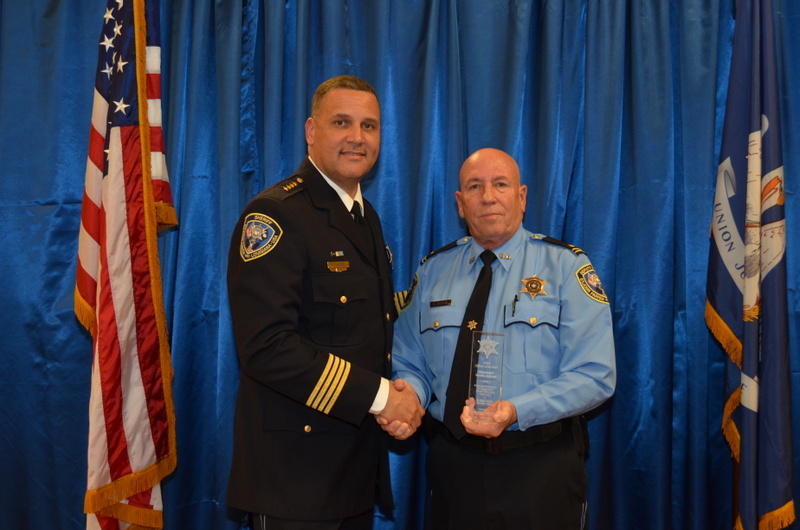 
Four St John Sheriff’s Officers were honored at the Awards and Dinner ceremony for thier outstanding service to St John Parish.

Deputy Anthony Cox received the Officer of the 1st Quarter and also received a Medal of Honor in Lifesaving.
Deputy Cox has been with the St John SO for 4 Â½ years, and is currently assigned to the Patrol Divison along with his K9 partner Duece.
Deputy Cox responded to a medical emergency in which a 7 year old was found unresponsive. Deputy Cox immediately put his CPR training into action in an attempt to revive the child. Upon the arrival of Acadian paramedics, the 7 year old was breathing and had a strong pulse, at which time was transported to River Parish Hospital for further treatment.

Although nominated for his recent work, Deputy Cox has consistently been an outstanding employee of the Uniform Patrol Division for the past 4 years. When not on duty, he has taken the initiative to train with our K-9 Division. He is constantly being recognized, not only by his Commanders and peers for his outstanding work, but by the citizens of the community for his professionalism and caring manner. On May 16, 2013, Deputy Cox will also be recognized and be presented with a “2013 Professional Excellence and Unit Citation” award by the Louisiana State Police Department of Public Safety and Corrections, Public Safety Services. His dedication to duty is unwavering.


Lt. Gordon Jeffcoat received the Officer of the 2nd Quarter.
Lt. Jeffcoat was instrumental in the capture of 2 armed robbery suspects that had robbed an elderly woman and her grandson, and was responsible for the Sex Offender registration in St. John Parish and was relentless in capturing those who failed to register.

Lt. Jeffcoat has been with the St. John Sheriff’s Office for the past 13 years and is currently the Assistant Warden of the Correctional facility

Deputy Michael Dean received the Officer of the 3rd Quarter, and was also presented with a Medal of Honor for Lifesaving.
Deputy Dean responded to a call of a 68yoa subject who was unresponsive and not breathing, and upon arrival immediately began to administer CPR. The subject was transported to a hospital and survived.

Deputy Dean also assisted in the apprehension of 2 armed robbery suspects and was instrumental in thier apprehension.

Deputy Dean has been with the St. John Sheriff’s Office for just over 1 year and is currently assigned to the Patrol Division along with his K9 partner Fox.

Detective Maurice Rodriguez received the Officer of the 4th Quarter.
Detective Rodriguez was assigned to investigate a missing teenager, in his relentless efforts, the missing teen was found four months later, the victim of a homicide, who had been killed and buried in the fields in Mt. Airy LA. Through his efforts, those persons responsible were taken into custody to be brought to justice.

Detective Rodriguez is a 5 1/2 yr veteran of the St John Sheriff’s Office currently assigned to the Criminal Investigations Division.

Lt. Gordon Jeffcoat was then honored with the 2013 Officer of the Year Award, presented to him by Sheriff Mike Tregre.